Last summer the DroneBoy team had a fantastic opportunity when we were asked to develop and implement a live Drone Delivery stunt for McDonalds in Montreal Quebec.  The big idea was to create a media event where our custom drone technology delivered hundreds of meals and beverages to selected social media influencers and some other lucky participants.  This all took place in a highly branded, secure area in the Old Port on the Montreal waterfront for one special day last August.  Here is how it all went down…

It took a while for the team to work out just how to safely deliver a package (food and drinks in this case) by drone to folks at the event safely and effectively. In order to mitigate the risk, remain compliant and still have an effective stunt took some very careful planning, building and preparations.  Just our sort of thing! 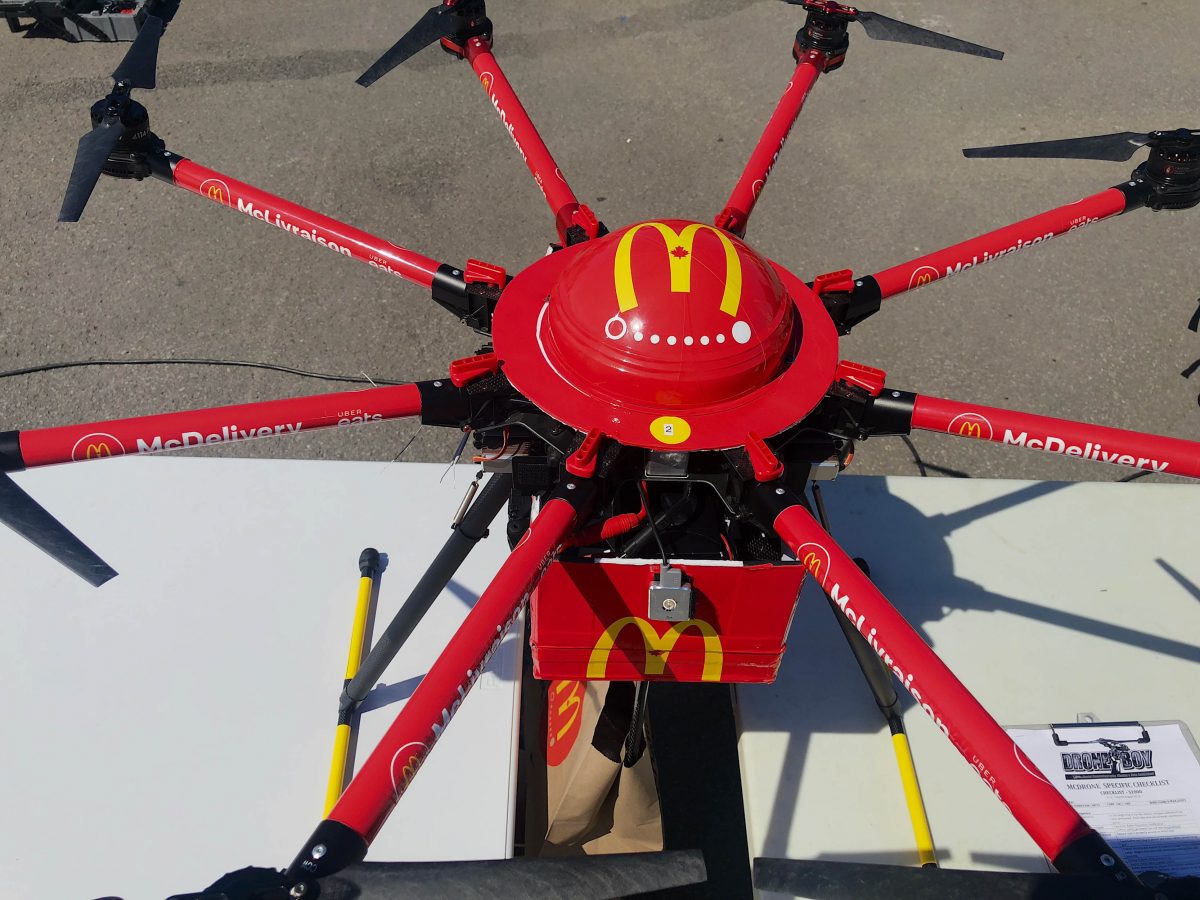 Due to the operational proximity to people, our team carefully chose drone technologies that had as many built in redundancy as possible.  We used an octocopter (8 rotor) drone that can still fly (safely land) with one or even two motors not functioning.  Our custom-built “Mc Drones”had dual batteries, as well as multiple flight controllers, GPS modules and compasses for added protection.  Each drone was equipped with telemetry which enabled us to monitor the health of all critical onboard systems as well as failsafe systems for all mission critical flight components. 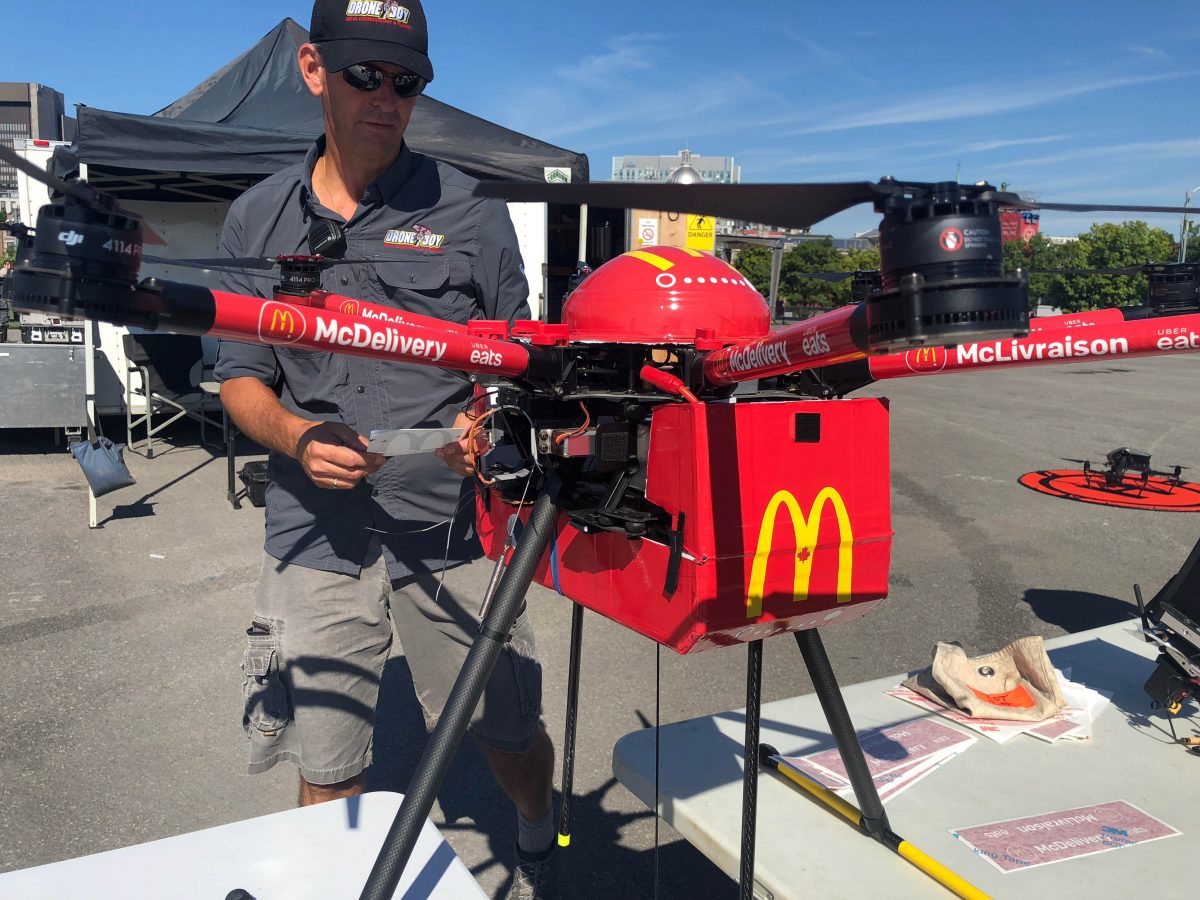 This meant any “dropping” of the food and beverage payloads was strictly forbidden and something we had to work around for sure.  This took us a while to figure out but we came up with a novel solution that proved much better than “dropping” ever could have been.  Here is what we did… 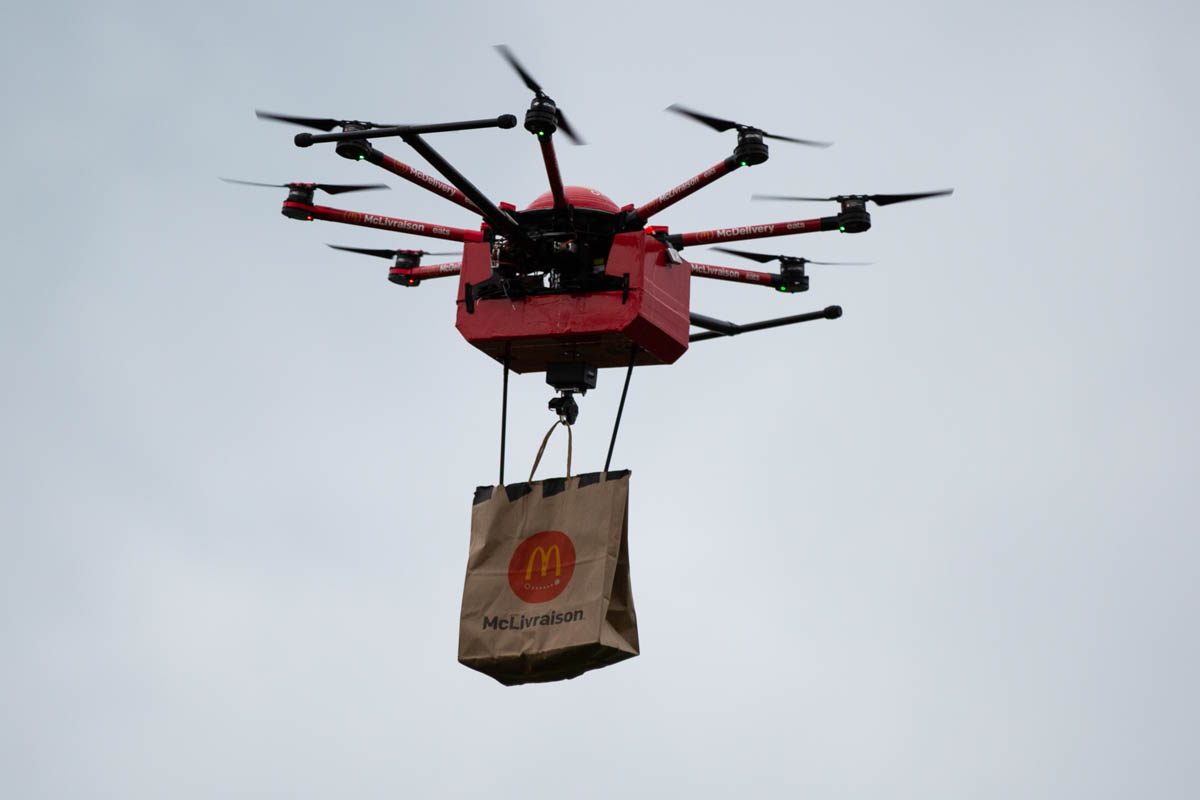 The DroneBoy engineering department came up with a unique solution by developing a custom, light weight, drone based winch system with a release hook.  This system was built around a digital encoder motor that could be operated remotely by a second person on our flight team called the “Payload Operator” aka “food lowering technician”.  This winch system in conjunction with our remote-control release hook worked perfectly and enabled us to hover safely 30’ overhead and lower the food package down to the recipients below and release it right in their hands.  No dropping involved! 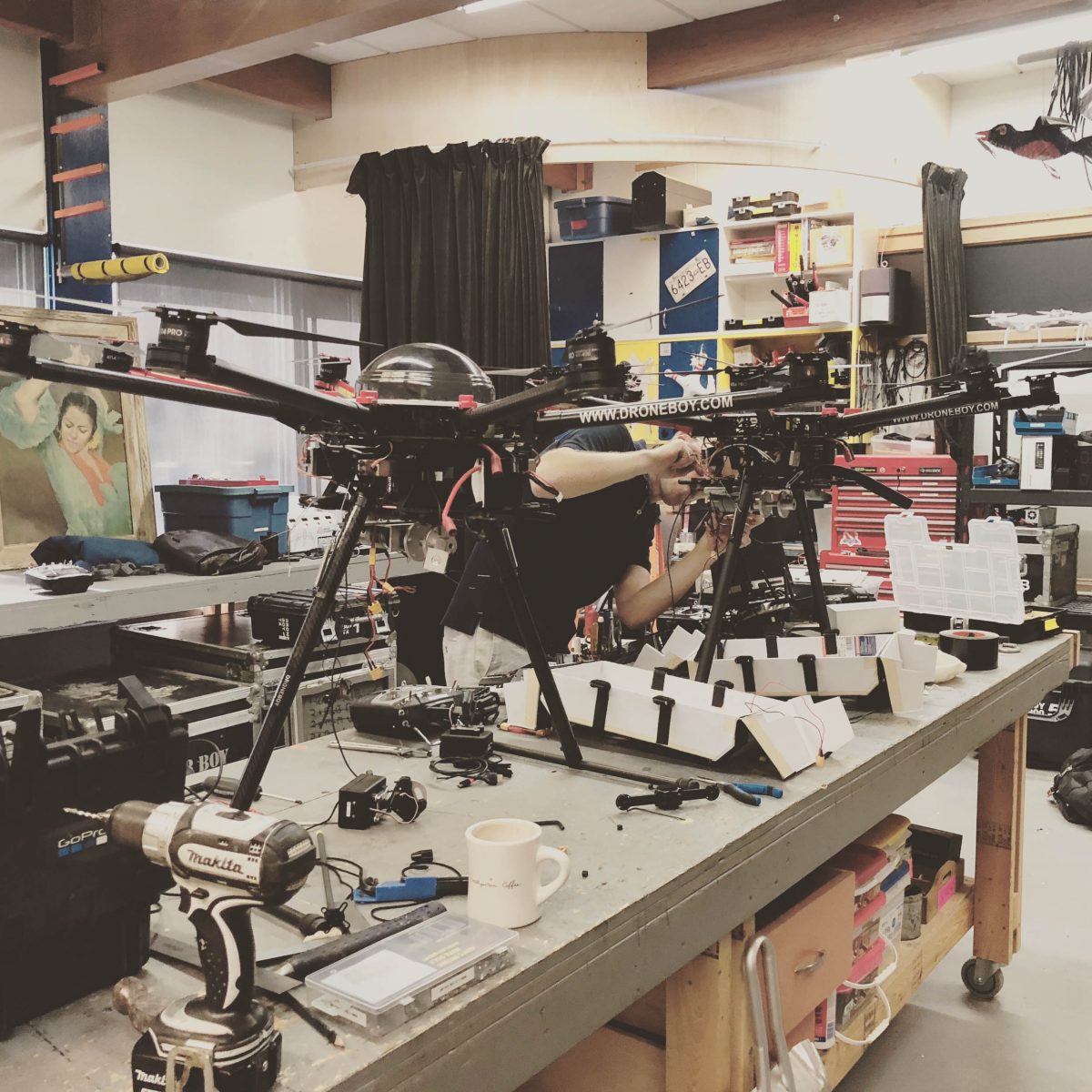 After we built our systems we spent weeks testing and tweaking everything at our facility in Ontario so that our equipment and the entire operations team was prepared for every eventuality as well as emergency procedures when the big day came. We then artfully branded our two hero Mc Drones, all spares and equipment and packed everything up for the journey to Montreal and the big day. 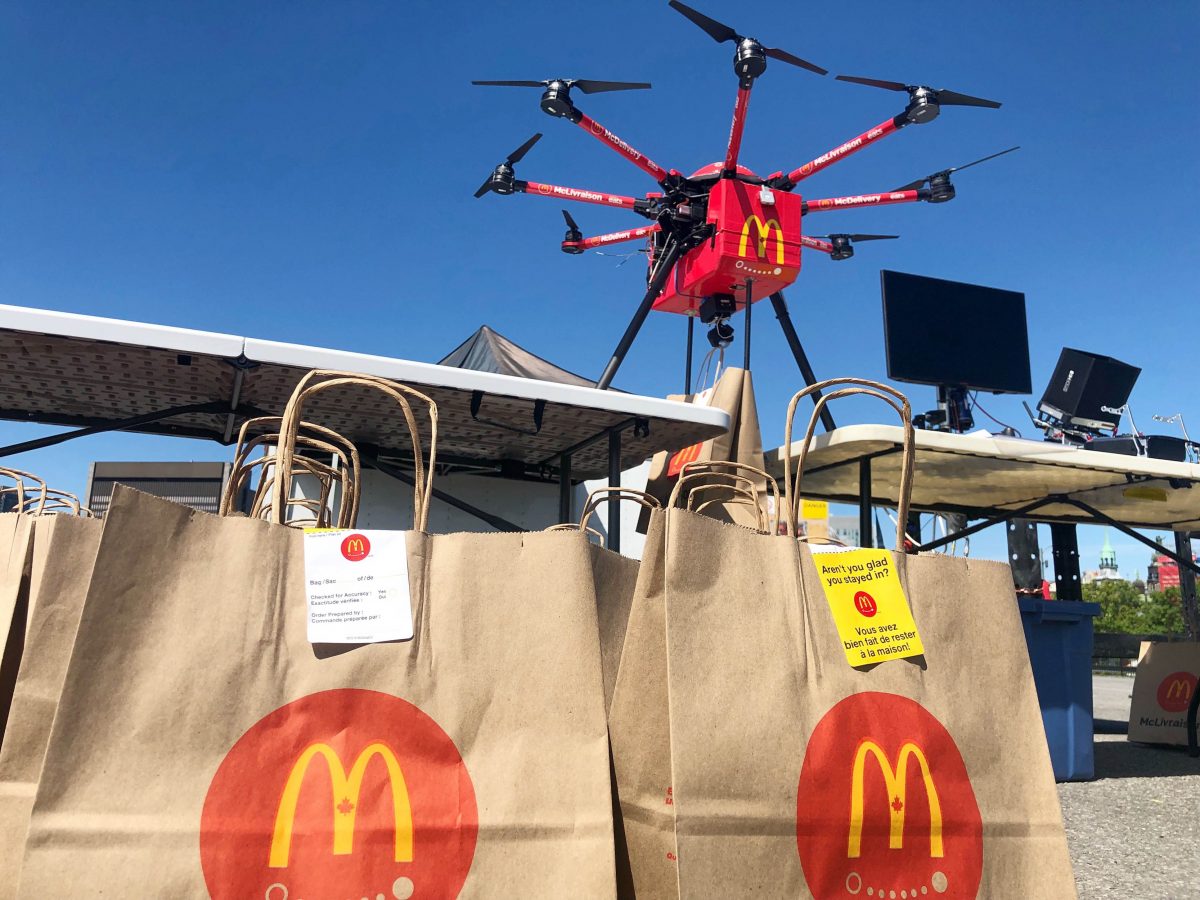 Again, in order to remain compliant with our Special Flight Operations Certificate (S.F.O.C.) at the site in Montreal took some very careful planning and flawless implementation.  We performed site surveys in the months prior to the event and took great lengths to work with our client in order to create a large, secure perimeter with fencing and the required security personnel and communications plan in order to maintain the required 100’ radius perimeter to any public who was not part of the production (the rules in Canada require that drones remain 100’ away from the public at all times). Only folks who had a solid, working knowledge of the stunt, had received our safety brief and signed waivers were allowed inside the participant’s zone and allowed to be part of the fun. 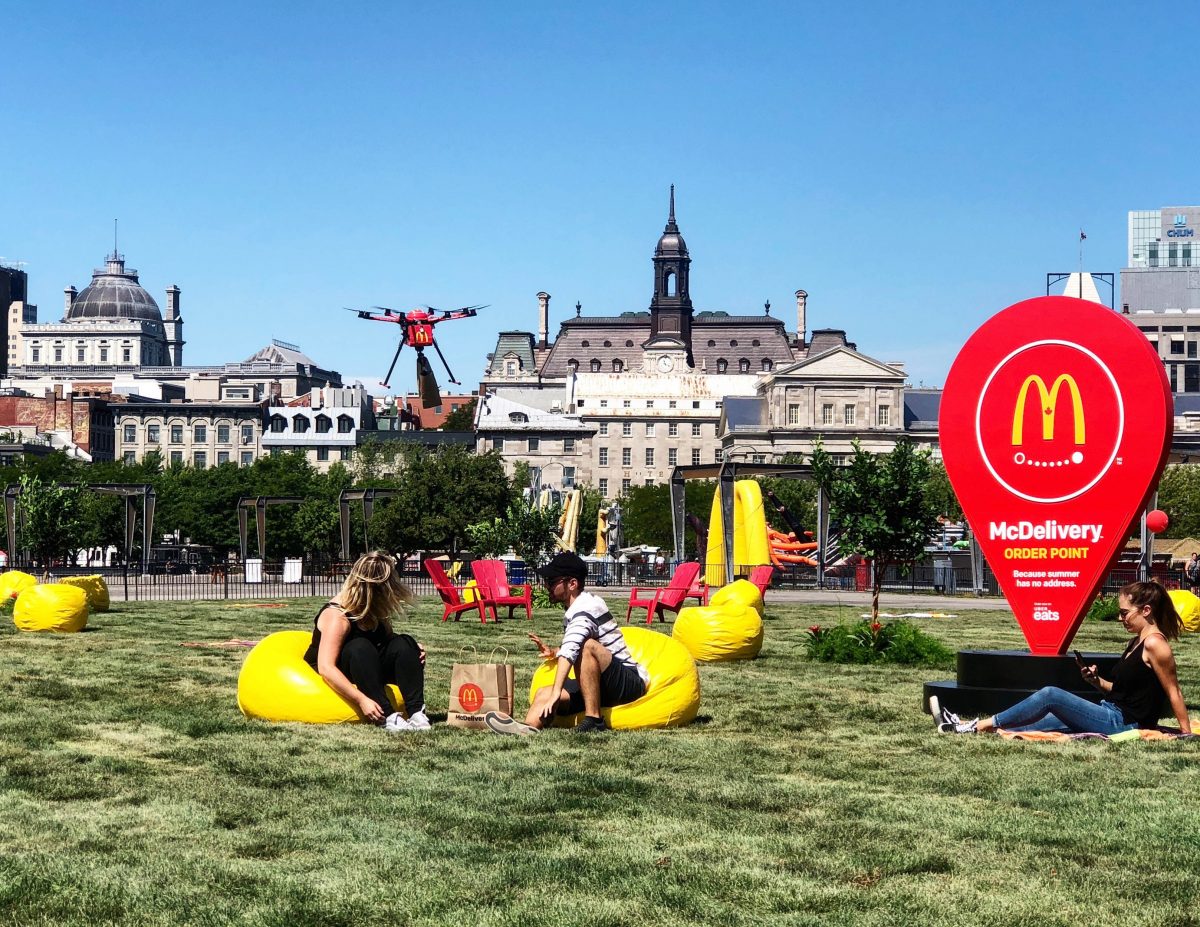 As you can see from the photos and video this unique stunt went off in a HUGE way and was a great success.  At DroneBoy, we always love the challenge of building new machines, modifying existing technology and making sure that everything we do is compliant with the regulations, highly effective for our end client’s needs and, above all else, safe! We feel that this project succeeded on all those levels and more.  As far as we know this was the very first drone delivery of food and beverages done here in Canada.   Boo-ya – strike up another one for DroneBoy.

Here is the commercial that was created from our live stunt.

Do you have a unique idea, stunt or product idea that requires custom drone technology? Check out our Custom Builds & Media Stunts page or  Contact us today and let’s talk about how we can make it a reality for you.