Since Transport Canada originally announced the new RPAS (Drone) regulations in January, we have been providing updates on these regulations as well as sharing with you how we at DroneBoy are progressing to ensure we are ready for them.  Well the day has come and the new drone regulations have been in effect since June 1, 2019 and we are excited to tell you that DroneBoy is 100% ready and fully compliant!  It has taken a lot of work, has required some big changes, and we have had to update a lot of our operating procedures and practices, but we have done it.  We are very excited to say that DroneBoy is now in a position, effective June 1, to service all your aerial imaging needs small or big under the new regulatory framework for drones!

A lot has evolved since our last Blog update on these regulations but a couple of key highlights are:

-A SAFE Certified Heavy Lift Drone –  You will recall one of the biggest hurdles was to have a heavy lift drone capable of flying a RED or an Arri Mini (a 20 lbs payload) which was approved for operation in controlled airspace.  DroneBoy worked very closely with Transport Canada as well as Freefly Systems, the manufacturer of our heavy lift drones to ensure we could come up with a solution and the efforts paid off.  Our fleet of Freefly Alta 8 heavy lift drones has been declared a SAFE RPAS allowing us to operate it in controlled airspace.  Not only that, because of this units advanced capabilities and reliability, we are also able to operate it closer to the general public.  Where as in the past we had to maintain a 100ft (30m) safety zone from the drone at all times, with this unit we are now able to operate as close as 16 ft (5m) to bystanders.

-A SAFE Certified DJI Fleet –  Another very recent development is that DJI, the manufacturer of many of our other working drones has not only secured a SAFE declaration for their drones to operate in controlled airspace as we last reported, but just this week they announced they have secured an additional declaration allowing them to be operated as close as 16 ft (5m) to bystanders as well! 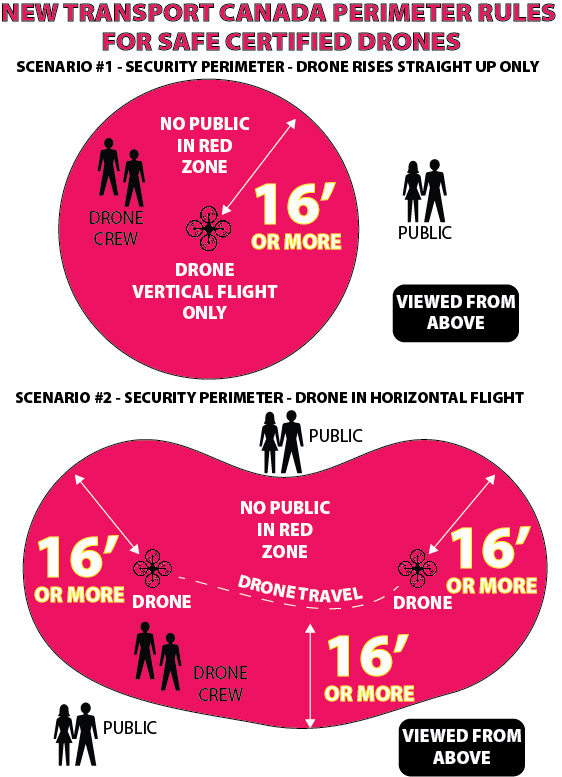 These recent changes allowing us to operate as close as 16’ to bystanders will make a big difference in how we are able to service our customers.  It opens the opportunity to conduct operations in areas and spaces that in the past would not have been possible because of the proximity of people not involved in the operation.  We at DroneBoy will always continue to enforce strict safety practices and where ever possible take steps to ensure we maintain greater safety perimeters, but these changes will allow us to get shots and angles that in the past were just not possible (legally!).  NOTE: One thing to be aware of with this change, a drone operator can only operate closer to bystanders (no closer than 16ft) IF they hold an Advanced Drone Operators Certificate AND they are using a drone that has been formally declared SAFE by the manufacturer for that express purpose.

So in short, all systems are go at DroneBoy this new reality and the implementation of the new drone regulations that has come into effect across Canada.

As a short summary and reminder as to the major changes that take effect June 1, 2019:

-Gone are the concept of recreational vs commercial drone use, instead anyone operating a drone must pass either a Basic or Advanced drone operators test.

–S.F.O.C.s are no longer required for most operations, however to operate a drone near crowds, events, organized gatherings etc.., an SFOC is still required.  Lead time to secure an SFOC for such situations can be in excess of 30 business days.

– Only Advanced Drone Certificate holders are able to operate in controlled airspace (this covers most majors centers across Canada) and only if they fly with a SAFE declared drone.

– Only Advanced Drone Certificate holders area able to operate at a distance up to 16 ft to bystanders and they must be using a drone specifically declared SAFE for that purpose.

– Only Advanced Drone Certificate holders can operate at a distance less than 5.6 km to airports / 1.8km to heliports.  (Airports and helipads are everywhere!)

– In controlled airspace, we may be able to operate at heights greater than 400 ft but this will require permission from Air Traffic Services.

Bottom line, while you can no longer ask for a drone operator to demonstrate their qualifications by showing you their S.F.O.C. (since the new regulations eliminate this document), you should be looking to make sure they have their Advanced Drone Operators Certificate, their drone is registered and is declared SAFE for the intended purpose (close to people, controlled airspace), they carry ample liability insurance, and last but not least, they understand the new regulations, the business of providing drone services, and they are first and foremost concerned with safety!